HUMAN BEING OR BEAST OF BURDEN?

Amy’s way of telling her daily chores and her life in Taiwan sounded like an amusing story and all of us got to share a laugh. But after a week in the shelter and seeing that Amy has settled down, she was requested to write her story for documentation and processing of her transfer papers wi th the Council of Labor Affairs. 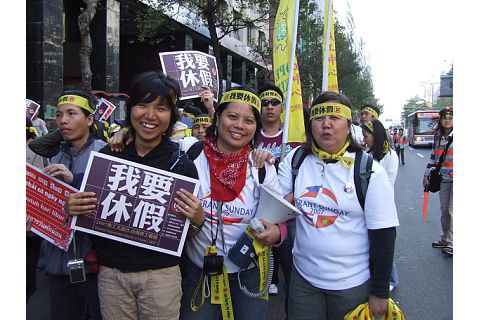 ... Amy’s reason to work abroad is almost the same story that we hear over and over again from migrant workers: married to an unemployed spouse, needs toprovide a better l ife, good education for the children, food on the table, house to live in. Amy accepted a fly now pay later arrangement with an agency to work as  caregiver. NT$ 10,000 (US1 = NT$29) will be deducted every month for 12 months from her salary. This will amount to a total of NT1 20,000  in placement fee . The legalplacement fee is only a month’s salary (NT15,840) plus other documentation, processing and miscellaneous charges totaling up to NT35,000. We really do not know what was written in the contract and how many documents she signed just to be able to leave the Philippines and come to Taiwan. Amy arrived in Taiwan on September 8, 2010 as caregiver to an elderly woman who passed away 2 months after she arrived, and she was then transferred to work for another employer. Amy’s contract was to work as a caregiver but the new ward was still healthy and instead Amy was asked to work in the farm. The employer asked Amy to deliver vegetables. She carried heavypack of goods and when a customer asked the employer what Amy’s nationality was, the employer answered, “ta hao ben, mei you yong, bu dong, ben dan de feilubin ren” (she is so stupid, useles s , doesn’t under stand anything, brainless Filipino).Amy starts work at 8:30 in the morning. She brings to the mountain the compost fertilizer that was made of pig and chicken manure, her ward’s urine & feces, leftover vegetables and left over food. They are left to rot and produce worms and this normally take a week or two. The smell is so overwhelmingly stinky that Amy would g e t mi g r a ine , dizziness, shortness of breath and abdominal cramps. She returns to her employer’s house at 2:30 in the afternoon. Most of the time she skips eating lunch. “How can I stomach my tasteless food when all around me is stingy smell, insects and worms,” she added. Returning to the ward’s house, other chores welcome her. Amy then goes back to the mountain farm at 4:00 PM and comes home at 7:00 PM carrying sweet potato tops , bamboo shoot s , squa sh and othe r produce, then another set of work awaits her. Lack of rest, over stress, exhaustion, and lack of sleep took a toll on Amy’s health. She started to have falling hair and bleeding gums but the thought of her family and the obligation on repaying her loan gave Amy strength and determination on a day to day basis. There was a time she vomited blood due to extreme heat.


One time Amah (ward) tripped and was unable to walk for at least a month. Amy felt so relieved because, she will go the mountain alone and be spared of Amah’s continuous shouting at her. Everyday Amy will look at the weather forecast and at times it is 38°C but she still continues to do her mountain work like digging the soil , carrying fertilizer, cutting and carrying bamboo, pulling the weeds and so on. She said her work is more of a punishment , a cruel punishment. She was treated like a beast of burden. She said that her employer does not need a caregiver but a farmer and a carabao. Showing her very dry and calloused hands, she said, “I am a woman but the work that they asked me to do was more than a man’s work, I worked like a carabao.”Amy called her broker repeatedly to inform him about her situation but the broker replied that if she really wanted to change employer she would need to pay him  NT20,000 and he will bring her to China to work. Is this the kind of service that migrant worker deserves on paying the monthly broker’s fee? Amy endured 1 year of abuses by the employer because of her love for her family. She suffered in silence, and the only thing she was leaning on was her faith that God is there and will never leave her; she has strength and the determination that she can make it through. I admire her endurance and courage. Even in the midst of all the diffculties, she patiently waited for the time where in she can pay her loan. Amy will not run away from her obligation. Amy is now in the shelter and will have a complete medical check up soon. Her documents for transfer to another employer is under process. Amy said, “the moment I arrived in the shelter, I believe God heard my plea.”by Beth Sabado

Read more prayer requests...
'A life unlike your own can be your teacher'.      St. Columban

Oops! This site has expired.

If you are the site owner, please renew your premium subscription or contact support.